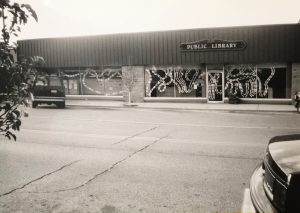 Library service in Grayslake dates back to 1931 when the Grayslake Women’s Club collected books and spent the next decade running the library as a volunteer project.

In 1941, voters approved the creation of the Grayslake Library as a tax-supported organization, governed by a Board of Trustees, and staffed by paid employees. Mrs. Irene E. Grutzmacher became the first Librarian, a position she held until her death in 1973.

In 1958, the Grayslake Library District was formed, serving not only the community of Grayslake but also those beyond the village boundaries, including Round Lake, Round Lake Beach, Round Lake Park, Thirdlake, Hainesville, and Highland Wake. For many years, the library operated out of a storefront on Center St.

Communities in the district grew steadily until the 1990s when population growth in Chicago suburbs began to explode. Voters approved the funding of a new standalone facility, and in 1997, the current building on Library Lane opened.

At the turn of the millennium, the library’s first website was introduced, and the first online catalog was implemented soon thereafter. In 2005, the first ebooks were added to the library’s emerging electronic materials collection.

Over the next decade, the library, its collection, and its offerings continued to grow. Self-checkout was implemented, the library joined MyMediaMall to expand its electronic materials selection, and special library cards for local teachers were given out for the first time.

In 2014-2015, the library’s lobby was transformed into Kent’s Place, a casual area where patrons could study, chat, and eat. At the same time, the space for children’s programs on the second floor was doubled with the combination of the old Youth Services room and the Margaret Cesaroni room.

In 2017, the library’s makerspace, The Hub, opened its doors to the public, featuring 3D printers, a vinyl cutter, laser engraver, sewing machines, and more for in-house use, and dozens of “maker kits” available for checkout. With the addition of the makerspace, four new study rooms were also constructed for patrons to use.

2017 also brought the Library of Things, a collection of circulating non-traditional materials such as telescopes, power tools, phone chargers, reminiscence kits, and more.

In 2020, the library got its first branding in a new logo, brand colors, and style guide, as well as a new outdoor sign.

The COVID-19 pandemic forced the library to change some of its services. The library began to offer curbside pickup, virtual programs–including some collaborative programs with other libraries–and staff members transitioned to working from home to keep the “virtual” library open for patrons.